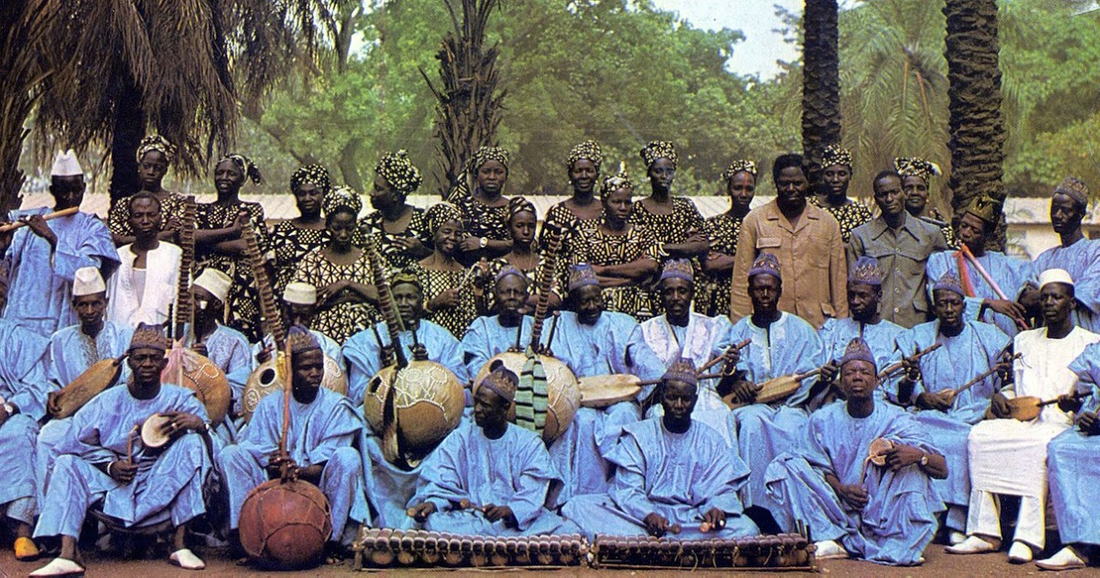 An hour of laid back African tunes. Starts with Mali - traditional, then modern groups reinterpreting the traditional styles. Then a set of lo-fi sounds from Madagascar, DR Congo and Guinea, a bit of soukous, rhumba and benga and we end with mbira electronics.

Broadcast on Dublin Digital Radio at 7pm on May 26th 2019

The first half of the show is all about Mali, yet another African country with a startling rich and varied musical tradition. Many time I'm struck by how just one country can seem to rival the whole of Europe in the sophistication and variety of its traditions.

We start with an outstanding piece from L'Ensemble Instrumental National du Mali. This was a cultural project started after Malian independence which gathered together performers from many of this country's vast array of different musical traditions and practices in different regions and ethnic groups - griots, musicians, singers, choral groups and so on. Check out this article in the wonderful MusicRepublic blog, which is where I discovered this.

Then we have a plaintive piece by Koni Koumare & Djeli Baba Sissoko from 1962 in tribute to the then-president of Mali, Modibo Keïta. This is from the excellent site Le Bamananke which features much traditional Malian music.

After this we have a tune by the American blues player Charley Patton. Enough has been said by far more knowledgable people about the links between West African music and the Blues - I think a juxtaposition is enough. 'A Spoonful Blues' is fascinating in itself as a commentary on addiction and the damage caused by drug abuse - heroin most likely, from the reference to a spoon in the title. That said the consensus on the internet seems to be that it's about cocaine - more information on drug usage in 1930's Mississippi would be needed here. In any case the song is probably my favourite blues tune - the spare guitar line, the driving rhythm, the way the slide talks with and responds to the vocals. But most of all I love the lyrics - the fractured sentences, the references - what the song is about is never stated - each line breaking off short...

We have another track by Tambaoura Jazz from the Lost Maestros project - they featured also in the last show.

We lead from that into a great track from a brand new album from Luka Productions. This guy is a rapper that I previously knew from an album heavily drenched in glorious autotune and keyboards, but also featuring a nice line in Malian rhythms and drums. This latest release shows him to be an unxpectedly versatile performer who has a real appreciation for traditional music.

The previous edition of this show featured a Praktika remix of a BKO tune, this time round we play the original.

To round out the focus on Mali, here's a documentary about the griot Bara Sambarou:

We have a clutch of songs featuring the more "lo-fi" African sound. Kasai Allstars are a sprawling collective from Kinshasa, the city that probably features most frequently in this show. They are best known for the wonderfully titled album "In the 7th Moon, the Chief Turned Into a Swimming Fish and Ate the Head of His Enemy by Magic" (2008). We feature a track from the more recent album "Beware the Fetish" (2014) which I think is the better of the two. They have a reputation for endless ecstatic live performances and I think this tune give a good idea of what this must be like.

Next is a track from Guinea - Kwi Bamba is a famous band leader active for many many years in his native land.  Kwi Bamba & L’orchestre de Gama Berema is a project of his from the 90's. Oulele is a wonderful live recording of a track that joyfully bounces around the dancefloor. Again, it's nice to get a feel for the live experience.

After that is Damily from Madagascar. Their sound is reminiscent of 80's lo-fi indie with an African twist - strongly similar to the raw sound of Gaspar Nali or Madalitso Band (both from Malawi).

We finish with four tracks featuring veteran musicians from various traditions. First off is a brand new release from Bakolo Music International - bearing the name of one of the oldest Congolese rhumba acts, dating back to 1948 and featuring two musicians from the first era of this music. Their website has some more information on the personnel. It's not exactly clear how justifiable their use of the name is, but nonetheless, it's nice to hear a new recording of old school rhumba.

The Lulus Band are one of the great acts of the golden age of Kenyan benga - check out this Afro7.net article with links to audio. Featured here is a wonderful 7" with the joyous vocals and driving beat that make this music so life-affirming.

Dekula Band are based in Stockholm and feature Alain Kahanga Dekula “Vumbi” - a veteran of the Congolese and Tanzanian soukous and rhumba scene. Check out his biography on the band's site.

We finish with the beautiful mixture of mbira and synth from Jacob Mafuleni & Gary Gritness.