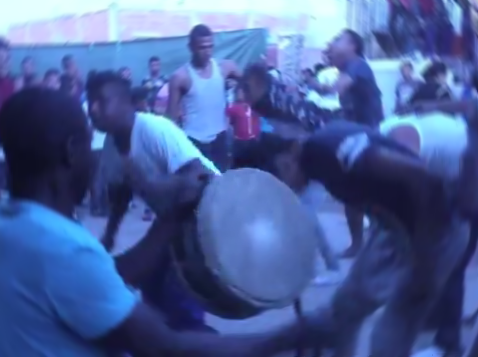 Image taken from the Ifriqiyya Electrique video Report from the Djerid Desert, Tunisia - #08: Trance at Dusk

This week, moving from the Maghreb to the Sahel. Electronic encounters with rhythms of North Africa, some Desert Blues, Gnawa from Essaouira and Kora music from Mali.

Didn't notice that the crossfader was bypassed until 5 minutes in. Hence the allmighty mess during the Ifriqiyya Electrique track.

Broadcast on Dublin Digital Radio at 7pm on February 3rd 2019

...two of the musicians who make up the five-piece Ifriqiyya Electrique... ventured to the Djerid desert of Tunisia to investigate and confront the religious ritual of the Banga, a ritual of legendary intensity indigenous to the region... Their original intention was not to join in the ritual but rather to research how this unique ceremony delivered “pure elevation” to its participants. This state of elevation or trance, is something that they had experienced in their own music, and they were searching for instructive parallels and new perspectives.

They are currently posting a series of videos on their facebook page showing various rituals around the Djerid region - the cover image of this post is taken from one of those.

The bandcamp pages also explains that the musical duo’s background is in the underground post-punk scene of continental Europe - which probably explains part of why Iffriqiyya Electrique remind me of noise hardcore bands I used to listen to a lot - something on Amphetemine Reptlie records or Scratch Acid. I think a lot of the late 80's/early 90's noise hardcore bands were aiming for an overwhelming, almost hypnotic wall of noise and pounding drums, the vocals distant in reverb.

Ammar808 comes out with equally intense music, but from a more electronic angle - I've heard great reports about the live shows. The man behind it is Sofyann Ben Youssef, who was also in Bargou08. There's a good interview with him on the Rhythm Passport site where he talks about where he's coming from

My approach to this is that traditional music alone would be good enough, but with those electronic instruments I can bring an extension to traditional music; I can enhance the low and high ends... I didn’t grow up with electronic music. I grew up in Tunisia, so when you tell me that, for example, this is a kick and it is supposed to go on every bar, I don’t know what you are talking about! ... So, the logic is to not have any preconceived ideas about the role of electronic sounds. I tried to be the closer to tradition as possible, even when I used the kicks.”

Which kind of sums up a lot of the music that gets featured in the Kollaps show - that encounter between electronic and tradition - Ethopian Records has described a similar musical journey in some of his interviews. There's more in this vein - it's a really great interview - very intelligent and forward looking - very aware of the politics involved in creating music that is so innovative and yet traditional, and aware of the potential of music to connect to the wider world and effect change.

So, Futurism is a way for me to reflect on what type of future we will have if we are going to keep doing what we do today. I try to imagine music as the soundtrack of a sci-fi movie that depicts North Africa in a few hundred years. That’s the kind of idea I fantasize about, and I look for a sound that can eventually change something today.

Audio excerpts (including some not transcribed on the page linked above) from the interview are on a time-limited Rhythm Passport podcast - it's no longer available on their site, but it may be out there somewhere - search for "Rhythm Passport Free Compilation – Vol. 33 – January 2019" - it's worth it - similar music to this week's Kollaps.

In the audio he mentions the Under Frustration compilation by the Tunisian collective Arabstazy and in particular Deena Abdelwahed - both of which have featured on Kollaps before. Her album Khonnar is getting a lot of attention, and she's just done a great mix for RinseFM with a lot of very interesting club music.

El Mahdy Jr and Lokal Affair are both originally from Algeria and both have quality releases on the wonderful Boomarm Nation label. The former's The Spirit of Fucked up Places is an outstanding album of dark, dark electronic beats with samples of North African vocals and instruments. The track here is from the Gasba Grime EP.  Lokal Affair swerves wildly from hard edged reinterpretations of Maghreb rhythms to kinda New Age stuff. The former - for example on the Seremunia EP, and some of the tracks to be found on his Soundcloud page are well worth checking out. The track featured here is from his new EP Lost Tribes.

As is well known by now, Mamman Sani made wonderful interpretations of traditional music from Niger in the 70's and 80's - “I wanted to make the Wodaabe songs on the keyboard, make the Tuareg tendé with the rhythm” - and the melodies swirl, languid and hypnotic. Decades later, Hama - again, one man from Niger and his keyboard - ends up in a similar place, but with plastic and neon where Mamman Sani has desert sand. Hama did a wonderful Spotify playlist featuring his "... favorite tracks, 90s techno, pop, and hip hop that inspired him to pick up the piano" - No Limit, Mr Vain, I Like to Move It and so on. The juxtaposition of Hama and Mamman Sani is great - it makes Hama sound like he really wants to play trashy 90's European dance music but the desert spirit is too strong and keeps taking over.

(Well worth checking out also is Hama's Imidiwan Nassouf single - a joyous, wonderful excursion through more swirling melodies, less plastic, and a great dub mix on the flip side - again, Boomarm Nation.)

We can't do hypnotic beats of the Maghreb without some Gnawa - included is a track by Maalem Mahmoud Gania, somehow we swerve from Niger to Morocco, then back to Niger for desert blues - Les Filles de Illighadad and Mdou Moctar. And wide though the net might seem - Niger electronics to Gnawa to desert blues - listen more closely and you'll hear the call and response. The melody of the Mamman Sani tune talks to itself - it's like there's a question and an answer, another question, another answer, over and over. Hama has an amphetamine fuelled version of a similar conversation. The melody is a series of phrases - each one a query, then a resolution. Once you hear the Gnawa and the desert blues tracks you hear where the purely instrumental electronic music is coming from - it's the call and response - especially audible these three songs because the call is solo and the response is done by a chorus. It's a pattern also found a lot also in Irish dance tunes and songs -

On the topic of Morocco, Natalia and Willie did a few great mixes of music found on cassettes in markets....

To finish - some Mali desert blues from Boubacar Traoré, who I had the great pleasure of seeing in the beautiful environment of Dublin's Unitarian Church some years ago. Then Salif Keita and Ladysmith Black Mambazo together, and finally the the Malian Kora player with the French cellist Vincent Segal - they have a breathtakingly beautiful album called Chamber Music.